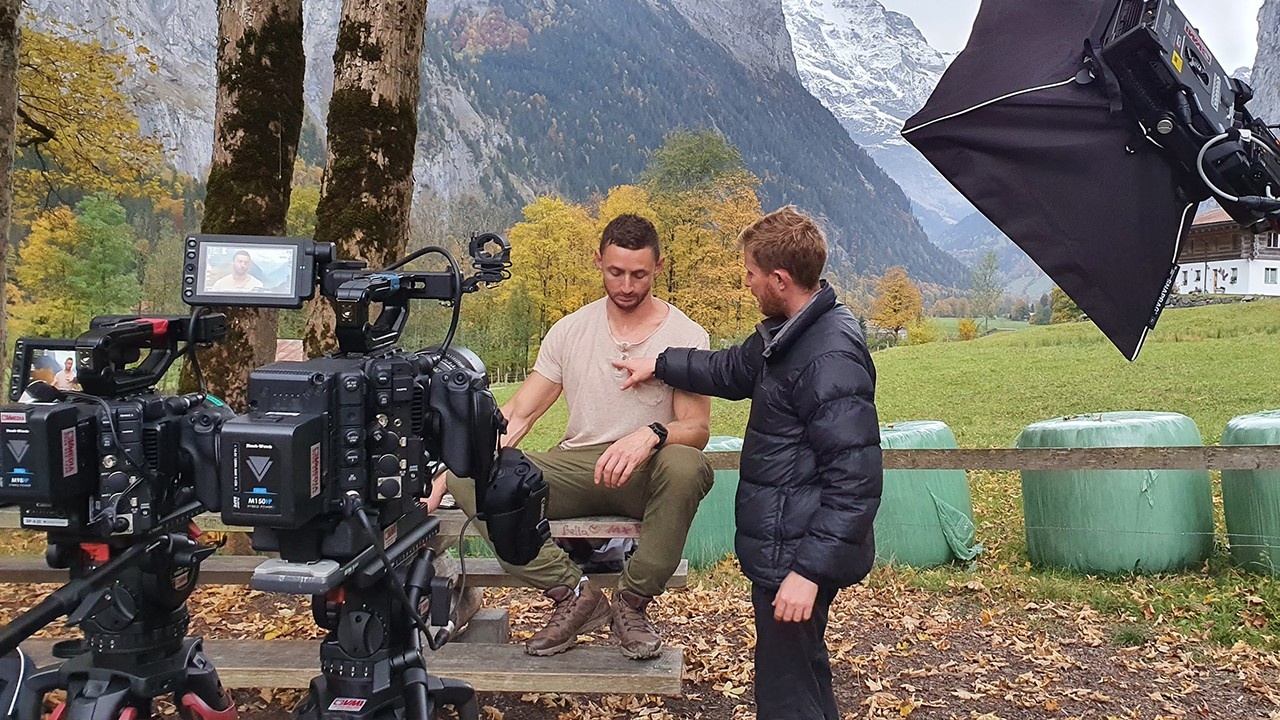 If you’re making an interview-led documentary, the interviews you shoot with your main characters will become the backbone of your film.

Knowing how to conduct and shoot an interview is the difference between making a mediocre documentary and an excellent one.

So how do you shoot a cinematic interview?

Well, let's dive into the seven key steps I take when shooting a cinematic documentary interview. 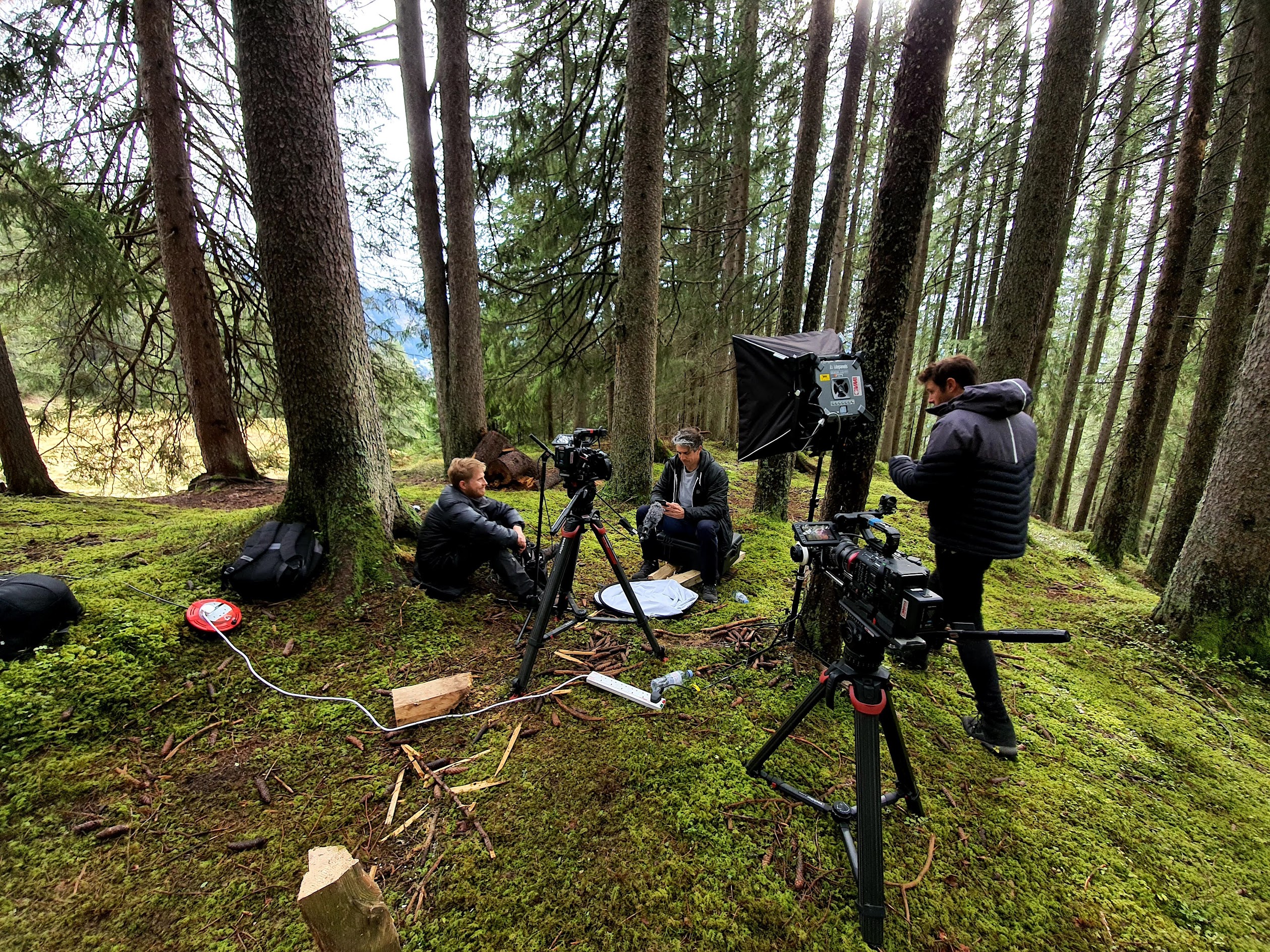 First up, you have to make sure you find a location that visually suits the look and feel of your film while making sure there’s no unwanted noise in the background. For example, you might find the perfect location in terms of visuals but because there’s a lot of noise from cars and planes, you decide to film inside where it’s quieter.

If you’re going to film inside try and find a room with little or no reverb and echo. Do a clap test in the room and see if you can hear the sound echo off the walls, floor and roof. If you can, see if you find a better room to film the interview in.

If it’s the best option available you can reduce reverb by putting a dampener such as a blanket on the hard surfaces and it will soften the echo slightly. 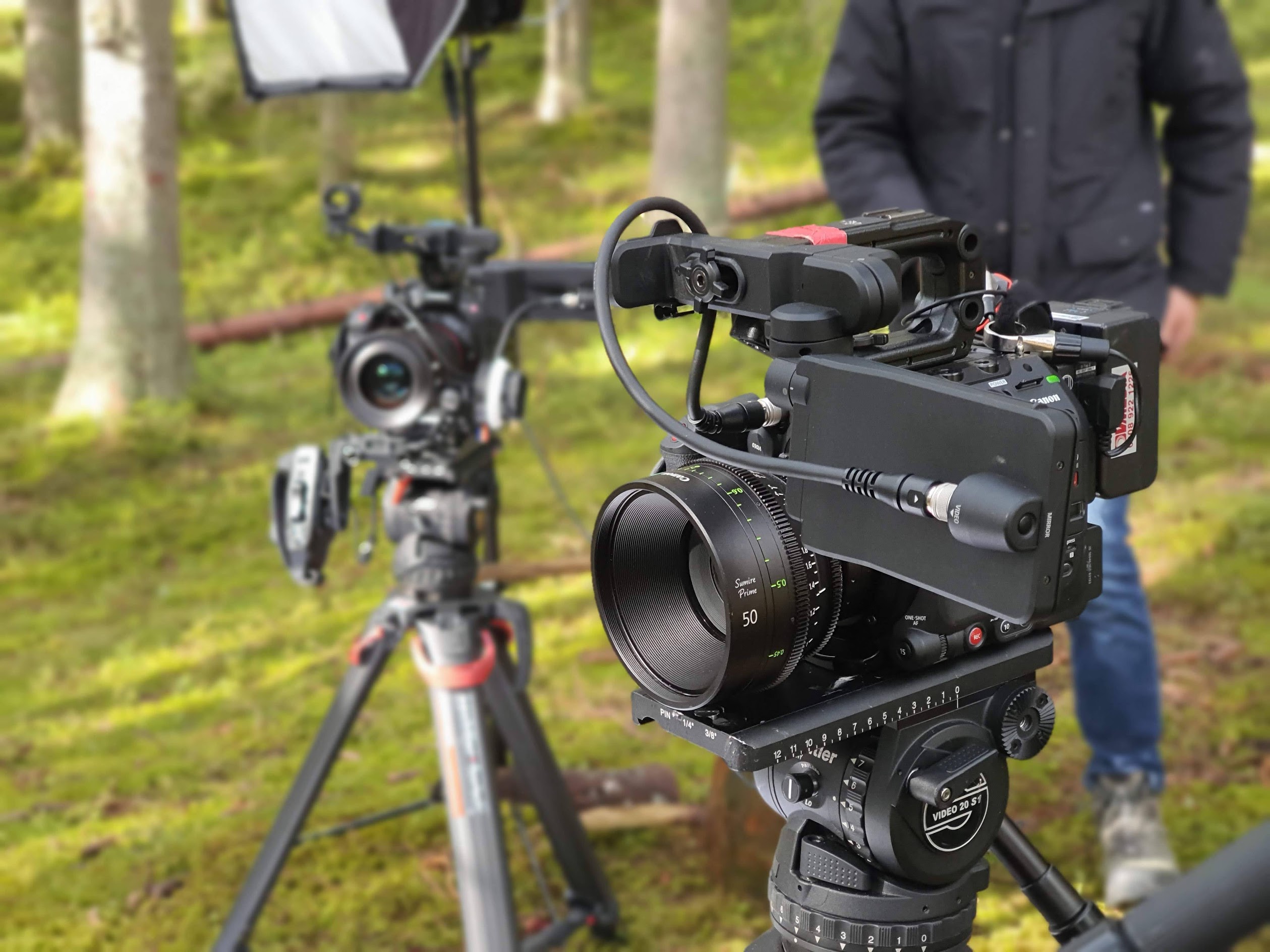 Next you need to decide on the positioning of your subject, camera and background.

This part of the process is so important and can be easily overlooked. When it comes to deciding where to position the subject, I love finding a spot that has a lot of depth. So I find standing in the corner of a room or stepping back from a location and looking for the right positioning works really well.

Then once you’ve found a couple of spots that have depth, I then choose which would be the best spot based on the lighting and the background.

Then I ask, how does this support the story and the visual narrative of the documentary? Is there a texture or visual theme that I want to include in each interview? 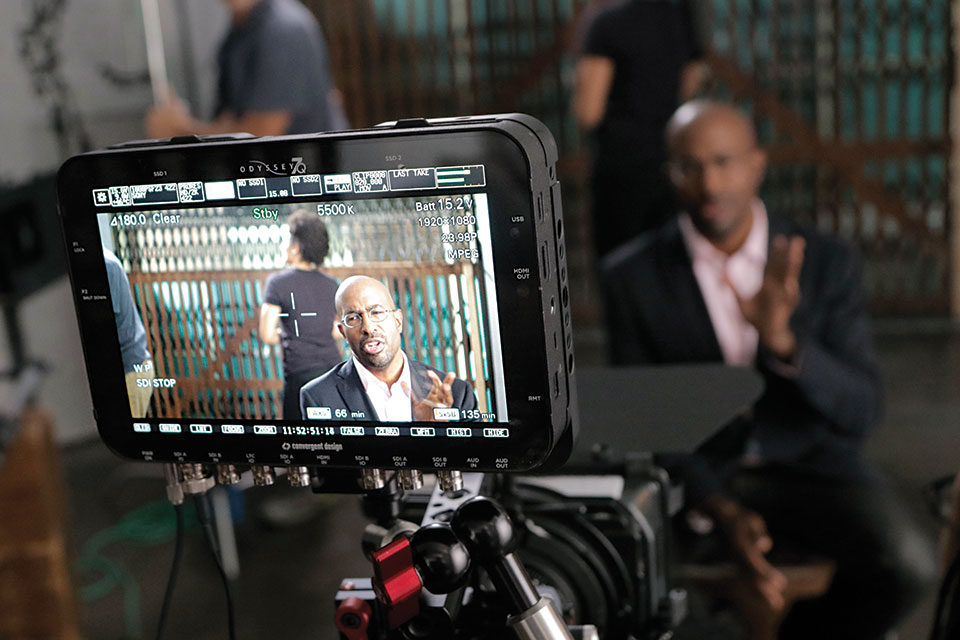 For example in the documentary 13th, they filmed most of the interviews against brick walls or bars and didn’t leave any lead space in front of the subject, a stylistic way of evoking the look and feel of a prison to reflect the themes of the film which is about mass incarceration in the US. 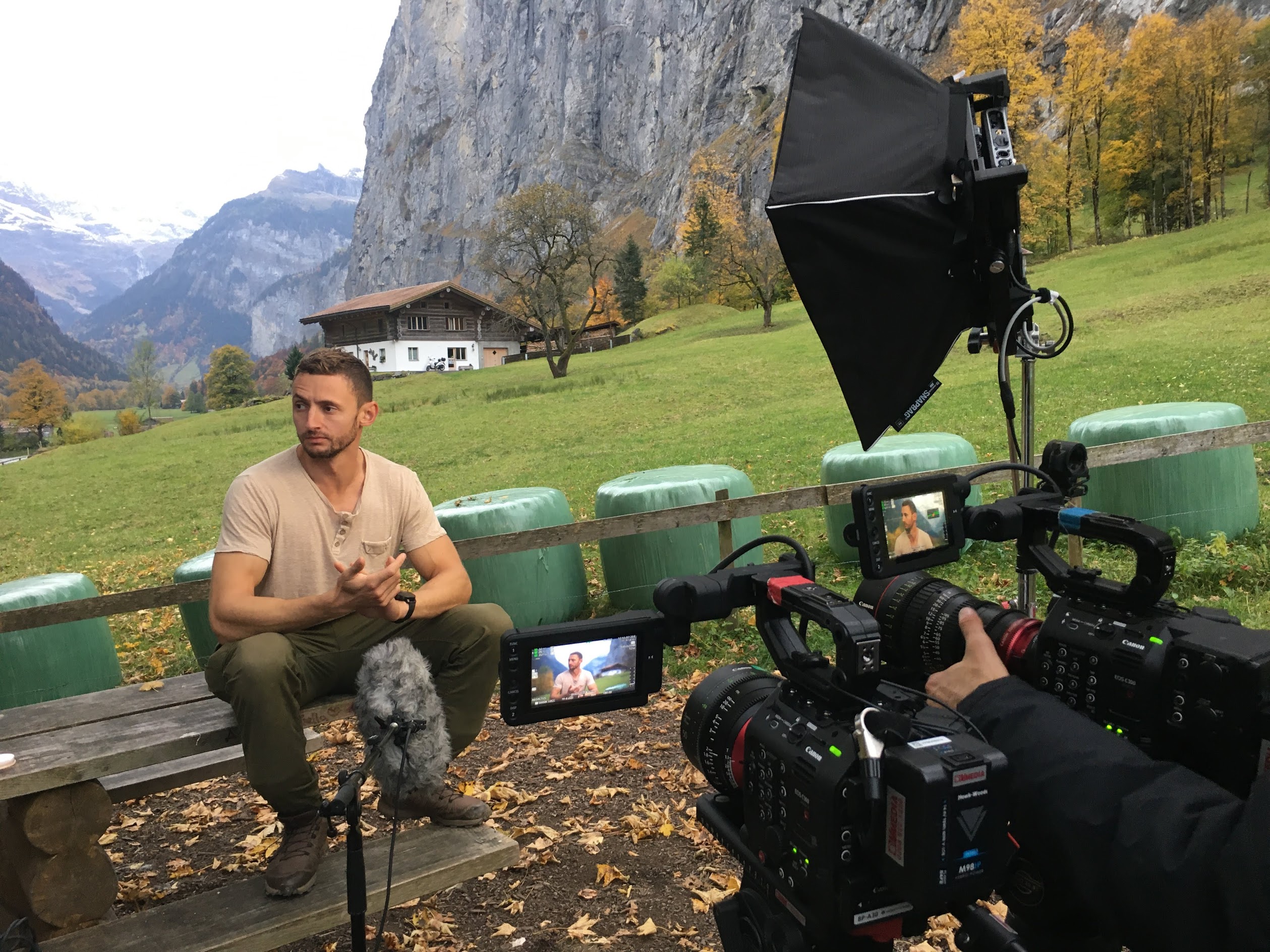 Once you’ve decided on your backdrop, then you need to decide whether you’re going to just use one camera or two?

I usually only use one camera as it can become overwhelming for the subject if there’s too much equipment.

However, it can also be really handy having too cameras, either to add more production value to the interview or if you want to have a wide and close up of the subject for emotional impact. 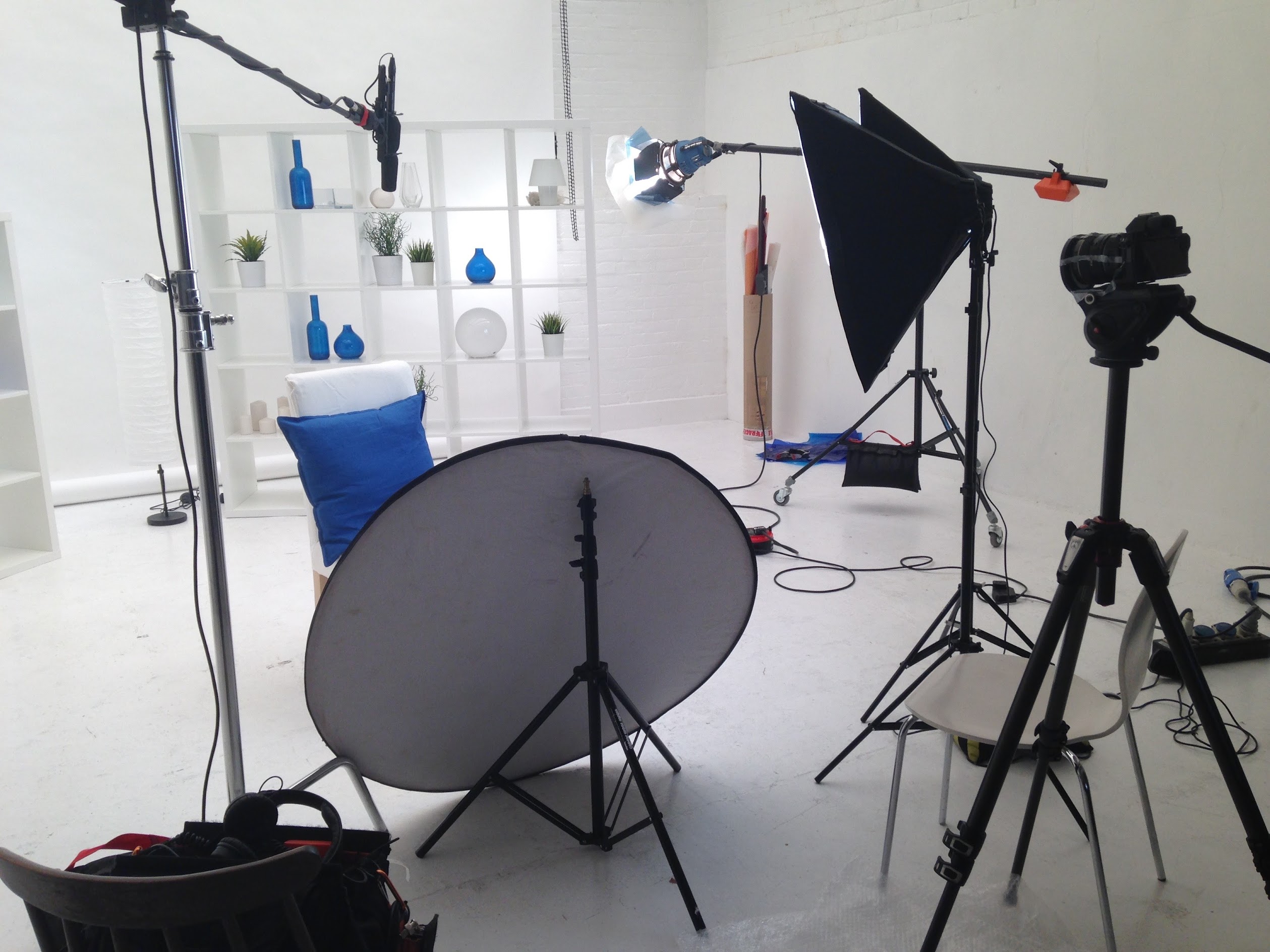 Once you’ve decided on your location and where you’re going to place the subject and the camera, step three is lighting.

Here’s a summary for the four looks I like to use when filming an interview: 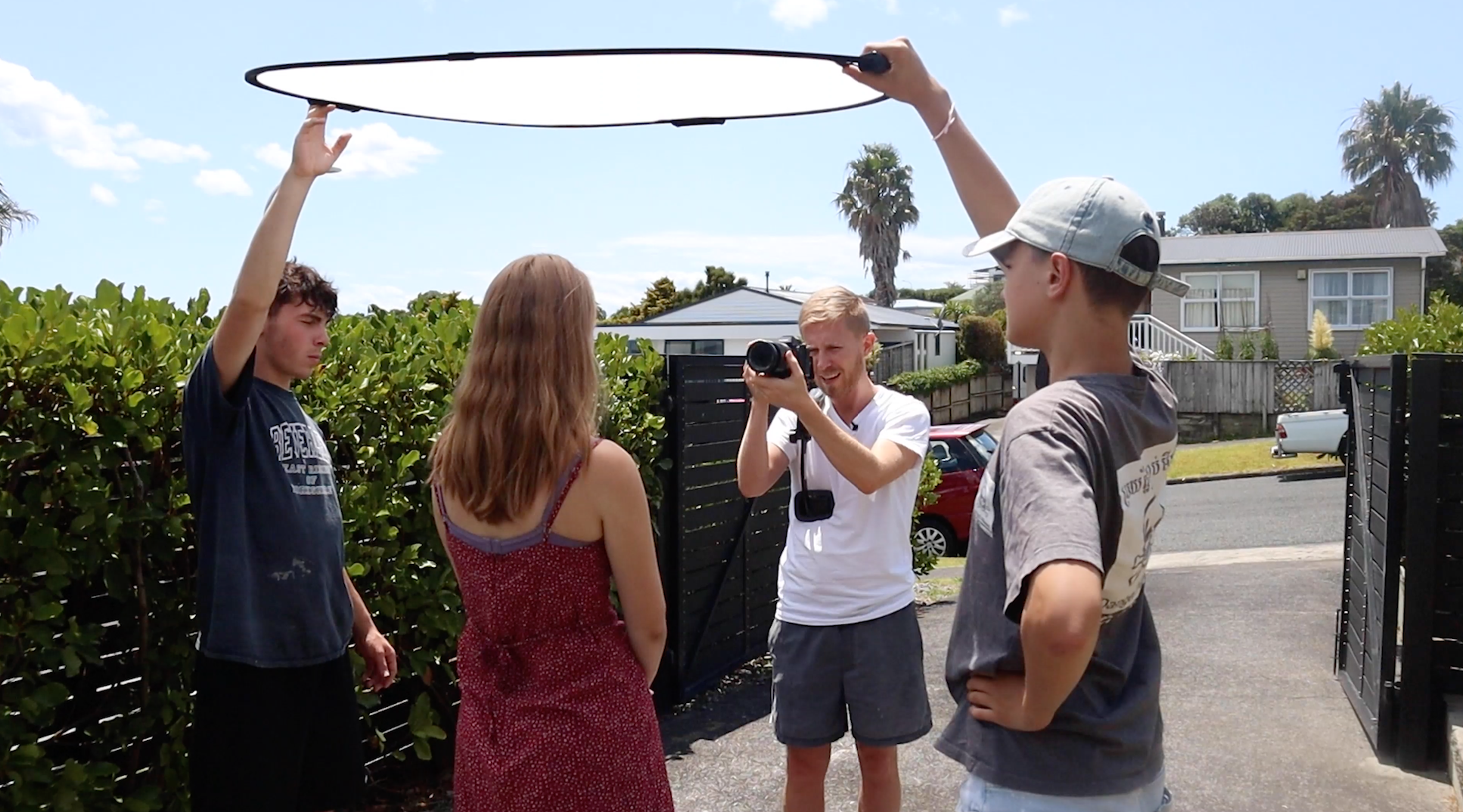 This is the most straightforward way to light an interview.

If you’re inside, put your subject in front of a window and this will create a lovely soft light on your subject.

If you’re outside you can use a diffuser and bounce board which reflects the light of the sun onto your subject and illuminates them. 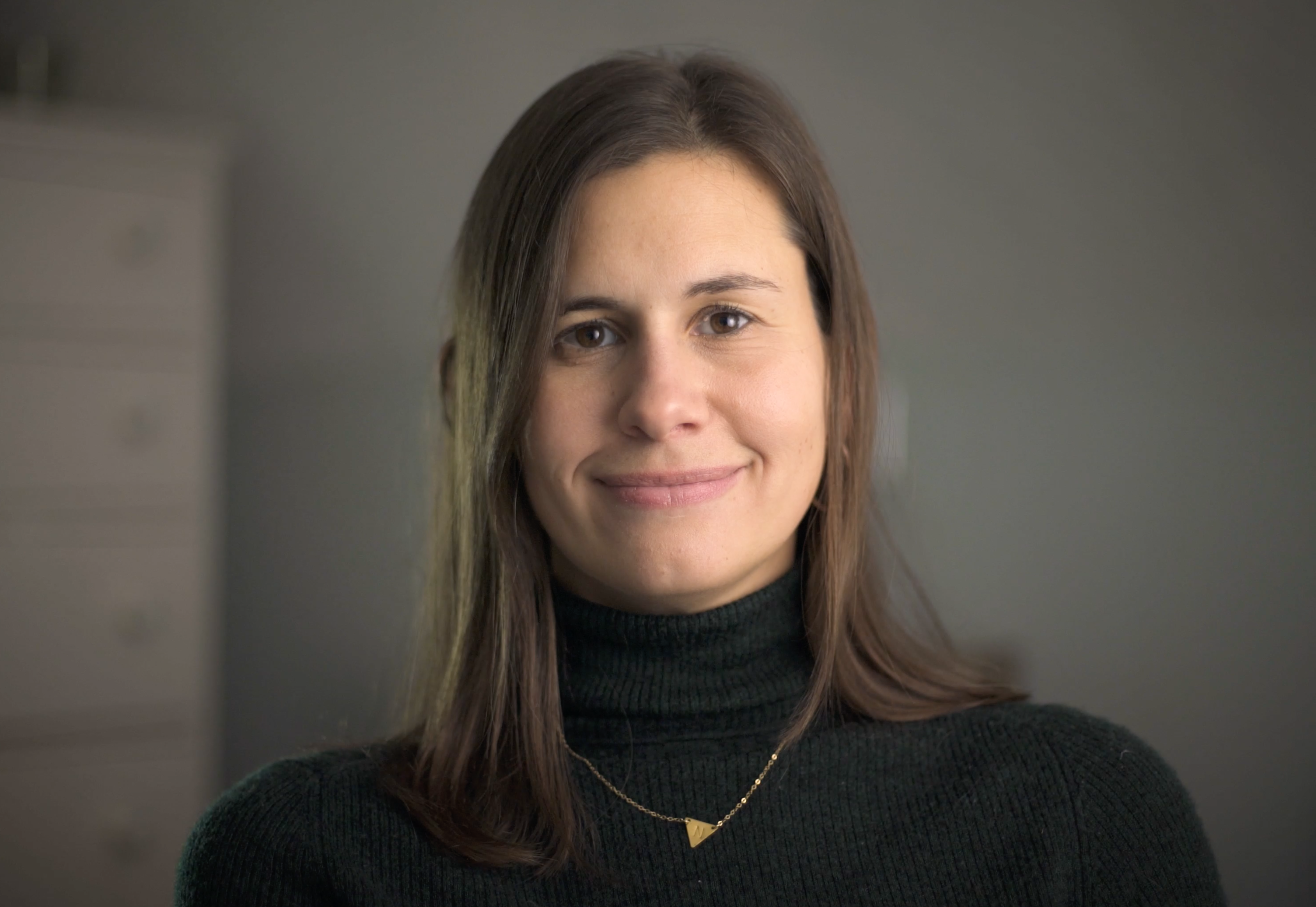 This is one of my favourite lighting techniques as it creates a beautiful soft light on your subject.

I first learnt about this technique when working on a feature film with legendary cinematographer Roger Pratt who’s shot some of the Harry Potter films and Troy. 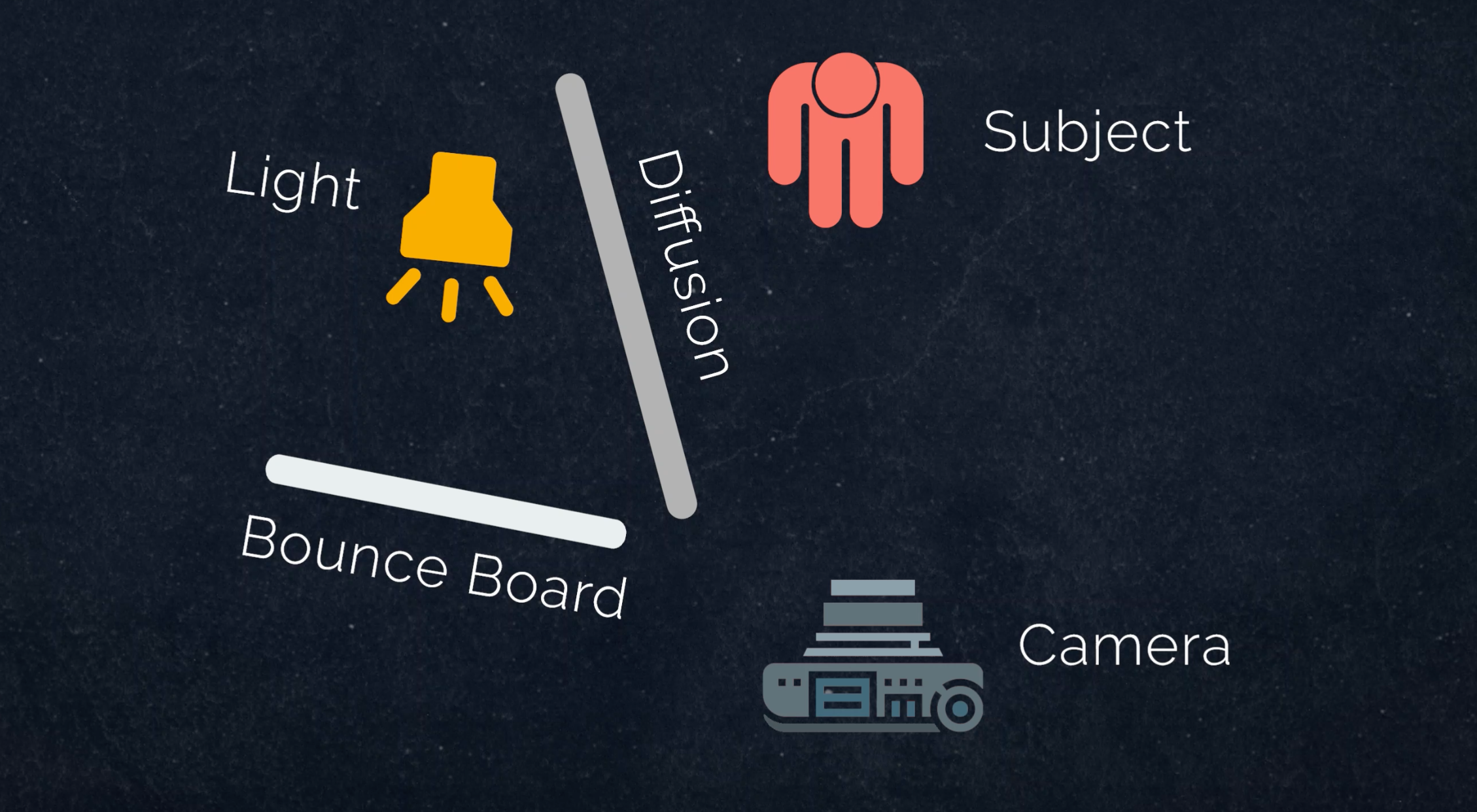 With this technique aim your light off a bounce board and then angle that bounce light through a diffusion fabric.

The combined elements of bouncing a diffusion will not only add a lot of volume to your light but will give an extremely soft and beautiful look for your subject. I’ll also be going into more detail on this later in the course. 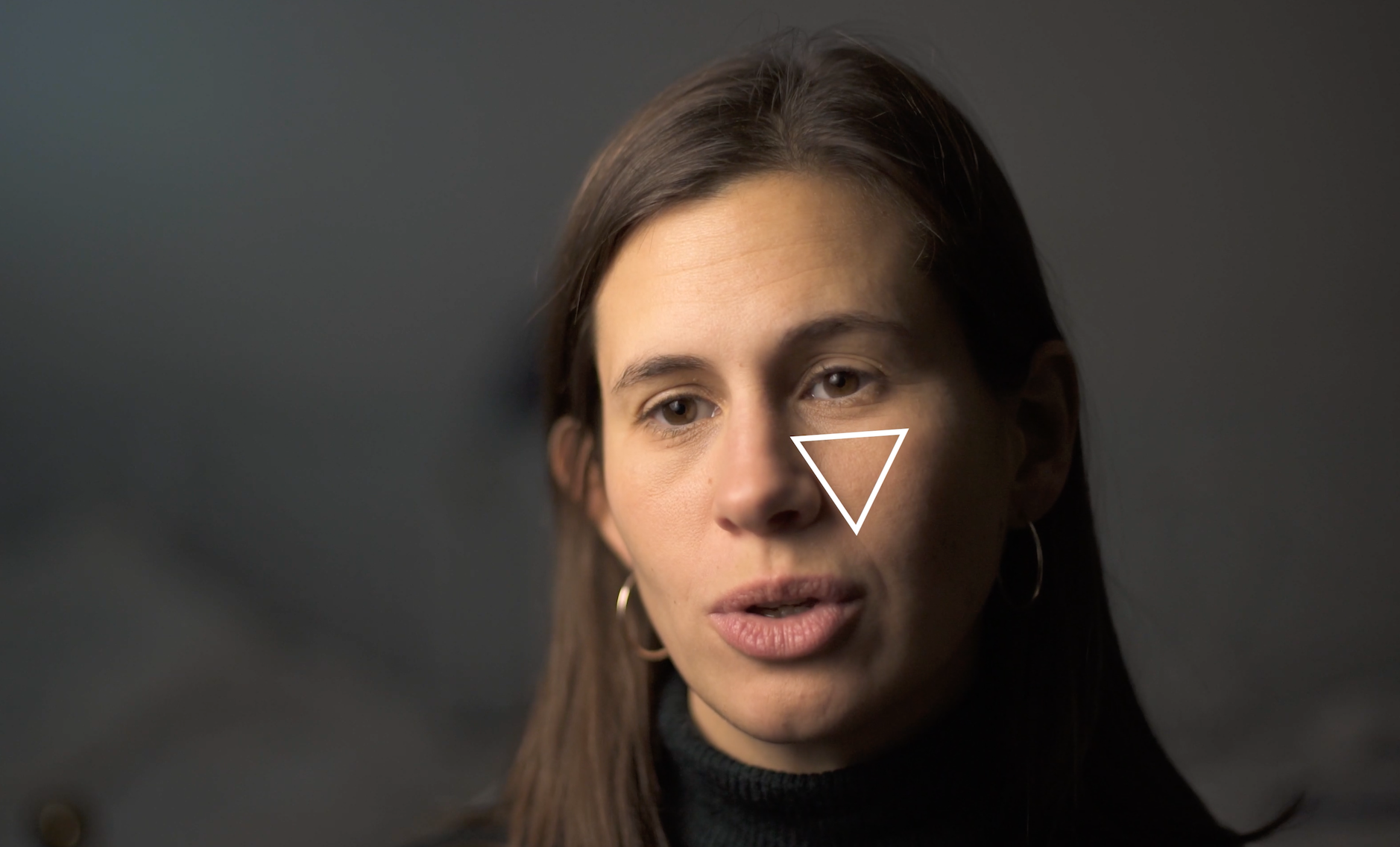 This way of lighting was inspired by the 17th century Dutch painter, Rembrandt. Rembrandt lighting is characterised by a small triangle just below the subject’s eye while the rest of that side of the subject’s face is left in shadow.

This technique can be achieved using either one light and a reflector, or two lights, and is popular because it is capable of producing images which appear both natural and compelling with a minimum of equipment.

Rembrant lighting gives a gritty and dramatic look and is great if you want to add some really cinematic lighting to your interview scene.

To achieve the Rembrandt look place your light about 60 degrees to either side of your subject’s face and slightly above them. Then tilt the light down to get that upside down triangle. Use a bounce card to fill in the shadows to vary how dramatic the lighting looks.

You can also diffuse the light if you don’t want it to look super harsh on your subject’s face. But still keep that dramatic contrast ratio. 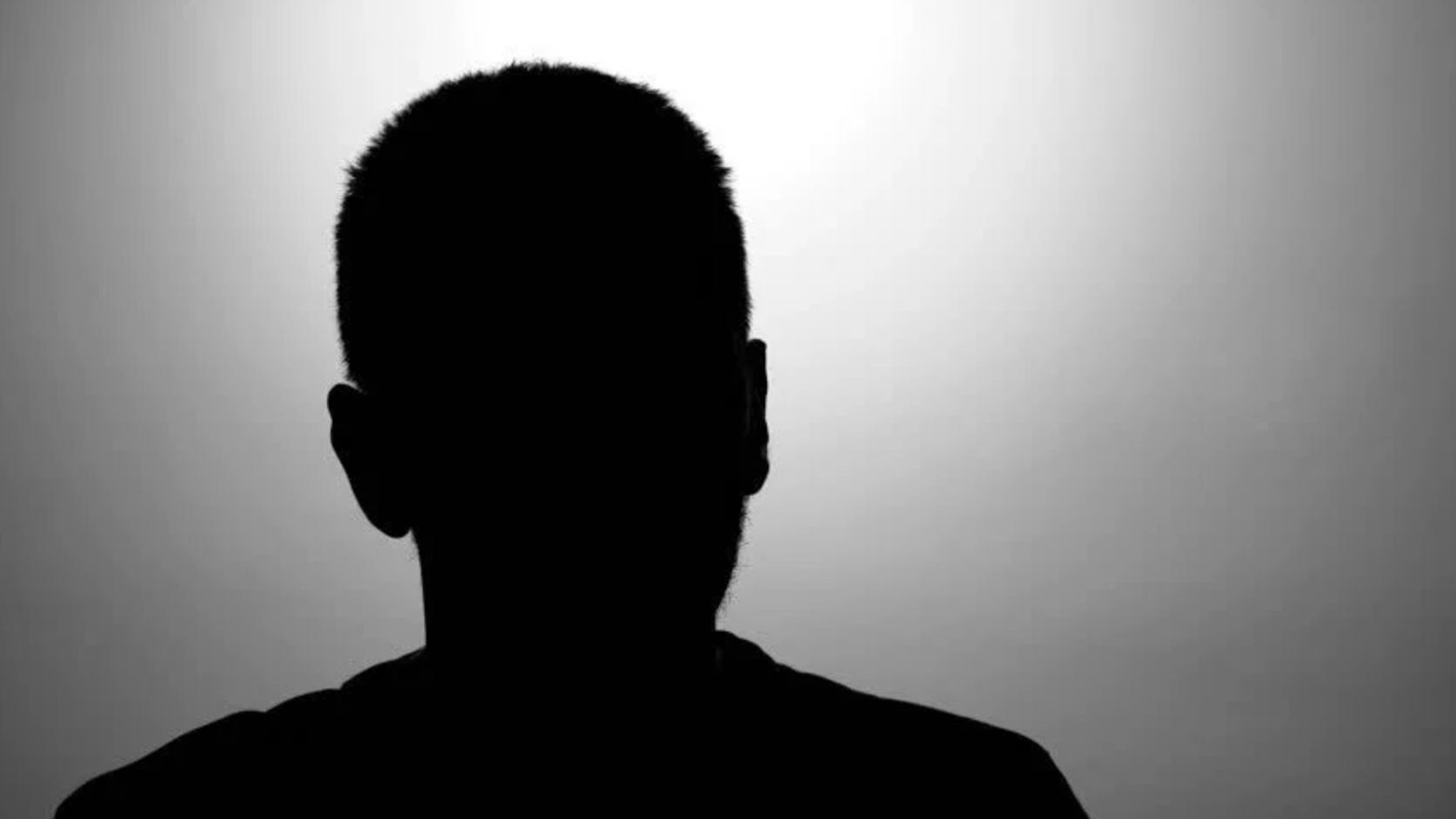 This way of lighting is a bit more bold and stylised than the other three techniques.

To achieve this look you’ll want to use a large soft light source behind your subject and increase the brightness until your subject falls almost into complete darkness.

If you want to give them a light bit of fill in the front you can add a bounce card in front of them so you don’t lose their face completely. 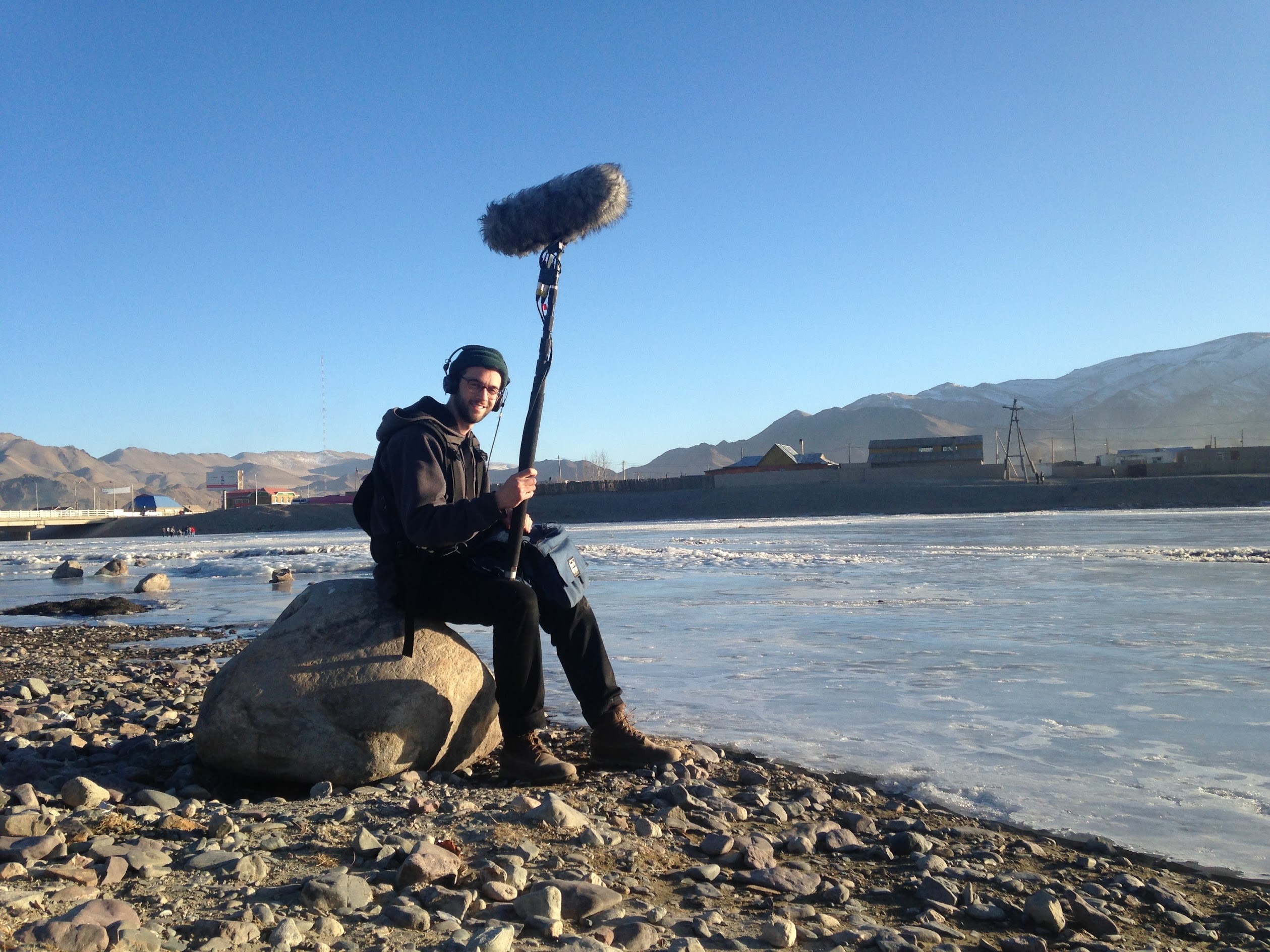 Recording high-quality sound is the most important aspect of any interview as it’s not the visuals of the interview that tell the story, it’s what’s being said.

You’ll be using the audio from the interview to shape the whole story of the documentary whereas the visuals of the interview will mostly be overlaid with B-roll. So getting high-quality audio from an interview is a top priority to getting a cinematic feel.

The main thing is to listen out for any potential background noises and either remove them or mitigate them as far as possible.

Potential noise pollution will vary depending on your location and whether you’re filming indoors or outdoors but a few key things to listen out for are: 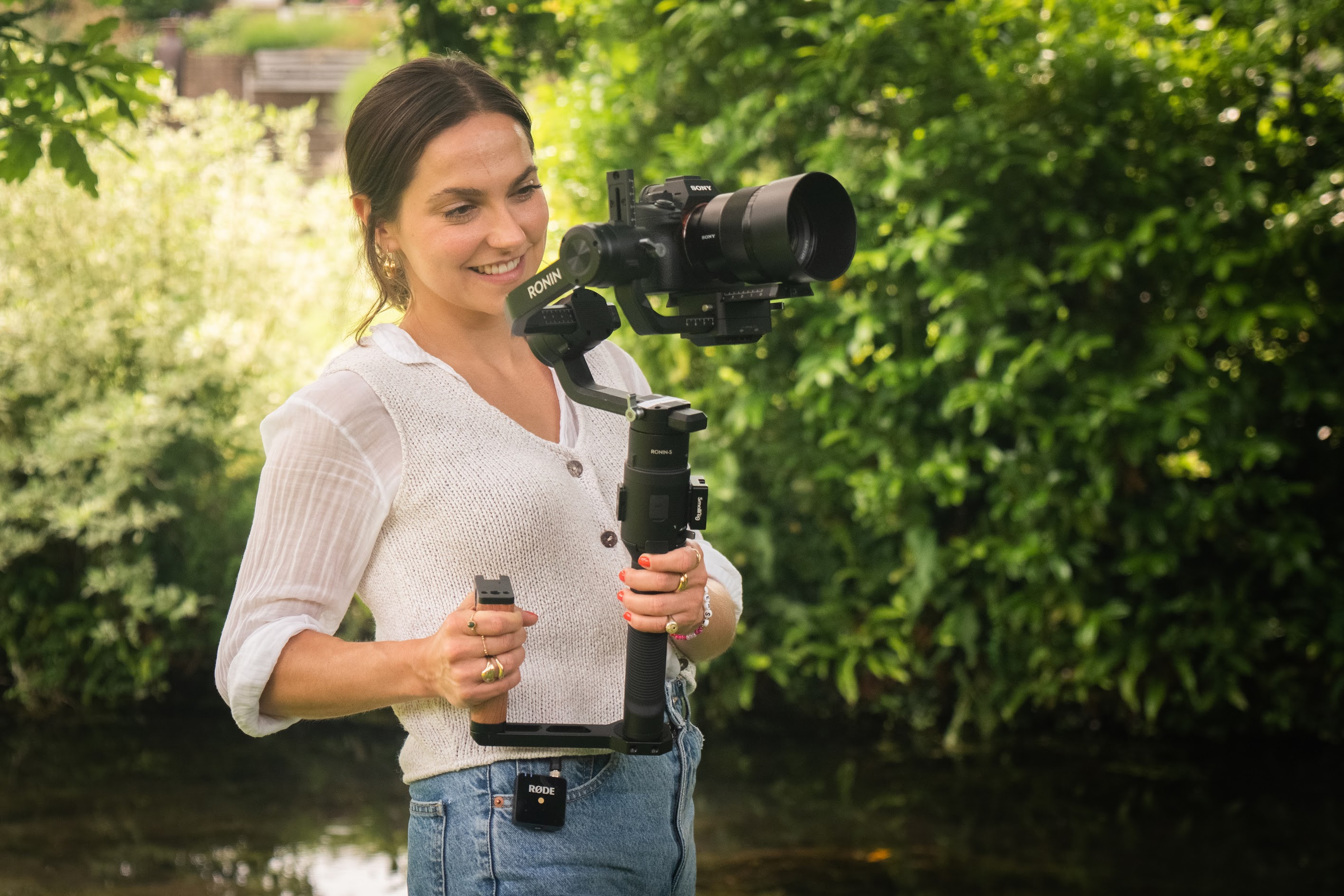 This is where you decide if you want the camera to be on a tripod with no movement, on a slider, on a gimbal or even just handheld.

This will all depend on the feelings and emotions you want to evoke during the interview. Nine times out of ten I like to keep the movement of the interview still by placing it on a tripod as I want to focus on the story and if I’m going to create a dynamic shot I will do this using B-roll rather than creating movement in the interview itself.

But there’s no right or wrong.

It’s more about personal preference and what works for you.

For example, if you wanted to interview the subject in action, like a chef, who’s cooking a meal or a carpenter who’s doing woodwork you’d most likely film handheld or on a gimbal and follow their face as they’re answering the question and continuing to work. 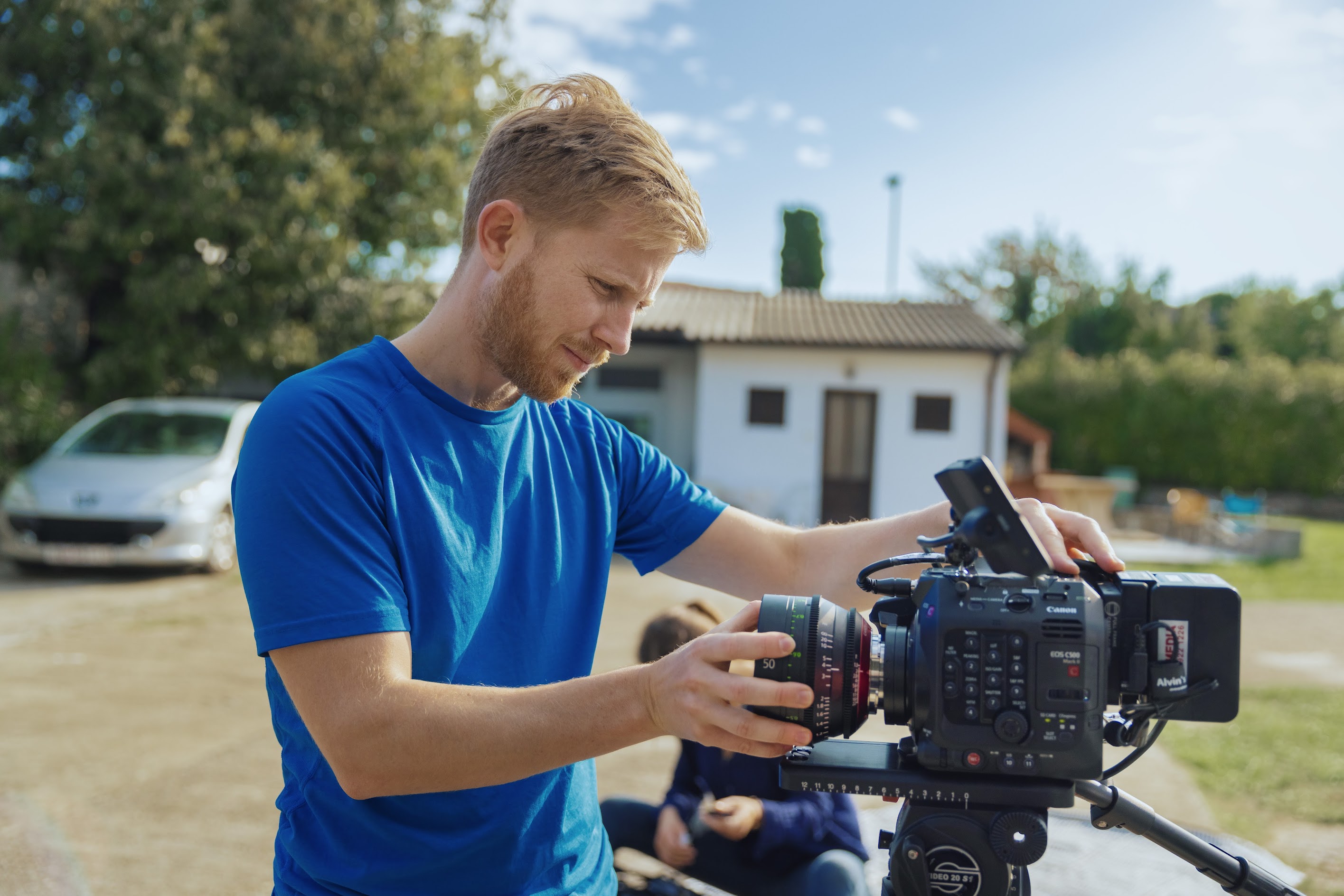 This is where you set the shutter speed, f-stop and ISO.

The settings I usually use for a sit down interview is 1/50th shutter speed as the subject doesn’t move very much.

However, if the subject was walking or running while moving I would use a higher shutter speed. With f-stop I like to have a shallow depth of field with the background out of focus as it looks more cinematic.

However, you don’t want the f-stop to be too shallow otherwise if the subject moves forwards in the interview they’ll go out of focus.

So I find having a f-stop of anywhere between 1.8 to 5.6 works well depending on how much your subject moves back and forwards. Again, if the subject is walking around or running during the interview I would have a higher f-stop. Anywhere from 5.6 to 12.

Then next is ISO, if you’ve had time to light your interview then you shouldn’t need to change your ISO too much and I would usually leave it at around 100, unless it’s really dark then I would have it anywhere from 100 to 800.

If you’re only using natural light then you might need a higher ISO and I would just adjust it accordingly so the image is correctly exposed.

Just remember, if you go too high with your ISO your image will become grainy. 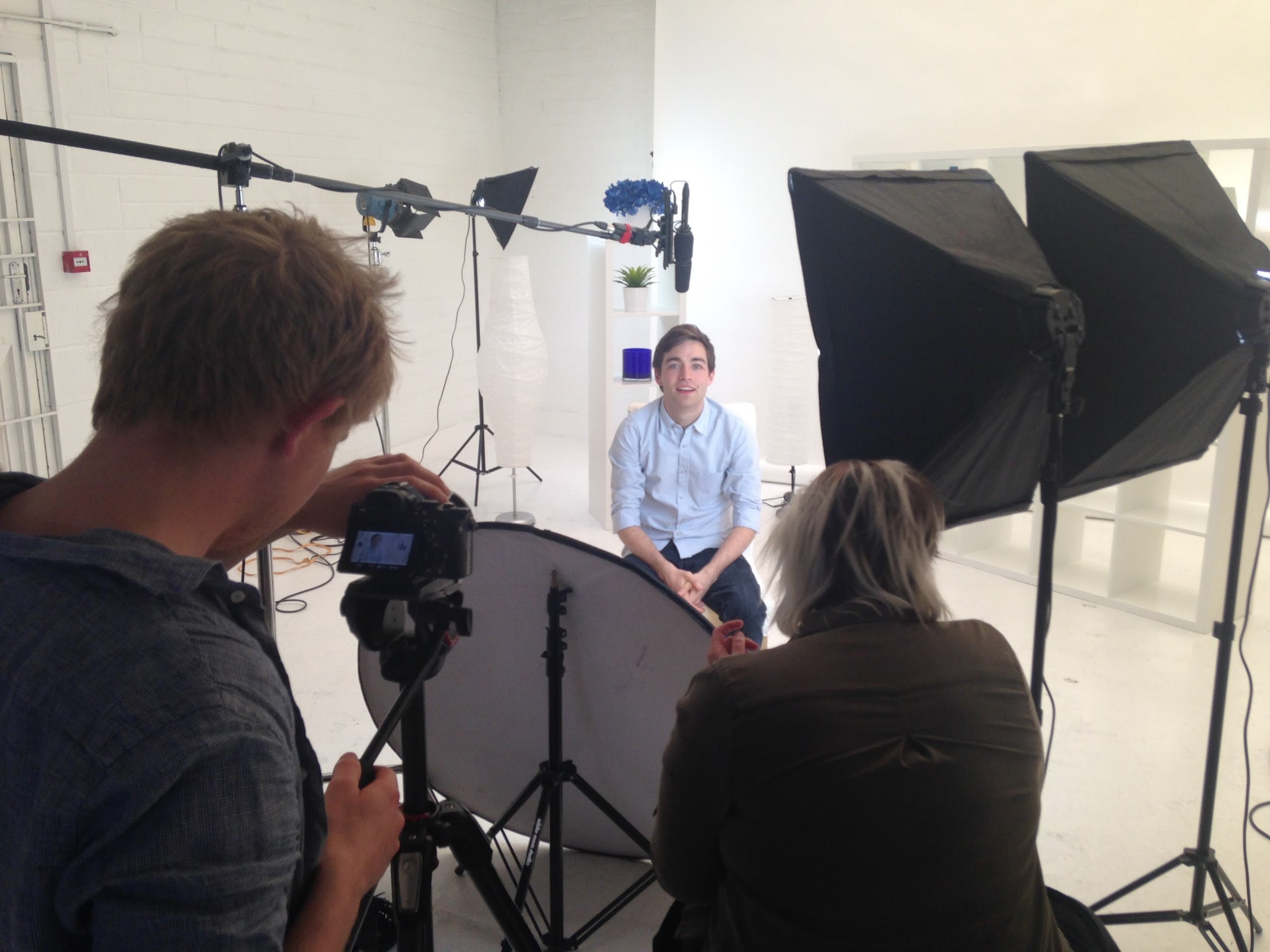 Once you’re all set up and ready to go, it’s time to start filming.

Get your subject to sit down and make them feel relaxed and comfortable.

Once they’re in a good space and happy with what’s going on, just ask them a couple of questions that don’t relate to the interview.

Then just before you’re about to ask the first question relating to the film, press record on your camera and subtly move from your previous informal question into your first interview question. The more you can make it feel like a conversation, rather than an interview the better your answers will be and the less nervous your subject will come across on camera.

For me, what’s really crucial is that transition from asking every day questions to interview questions.

What I’ve seen a lot of beginner filmmakers do is say, “Ok great. We’re filming now. Are you ready? Let’s ask the first question.”

This instantly makes the subject feel nervous as they feel like they have to perform and they are no longer relaxed.

Whereas if you just ask some conversational questions and slowly ease into the first interview question it will feel much more organic and real and the subject will forget that they’re on camera and instead embrace the conversation that you’re having with them.

Before the interview, it's also important to ask the subject to answer their questions in full by repeating the question in their answer. Because if you don’t want to include your own voice in the film, then what your subject is saying needs to make sense once you’ve cut out the question. 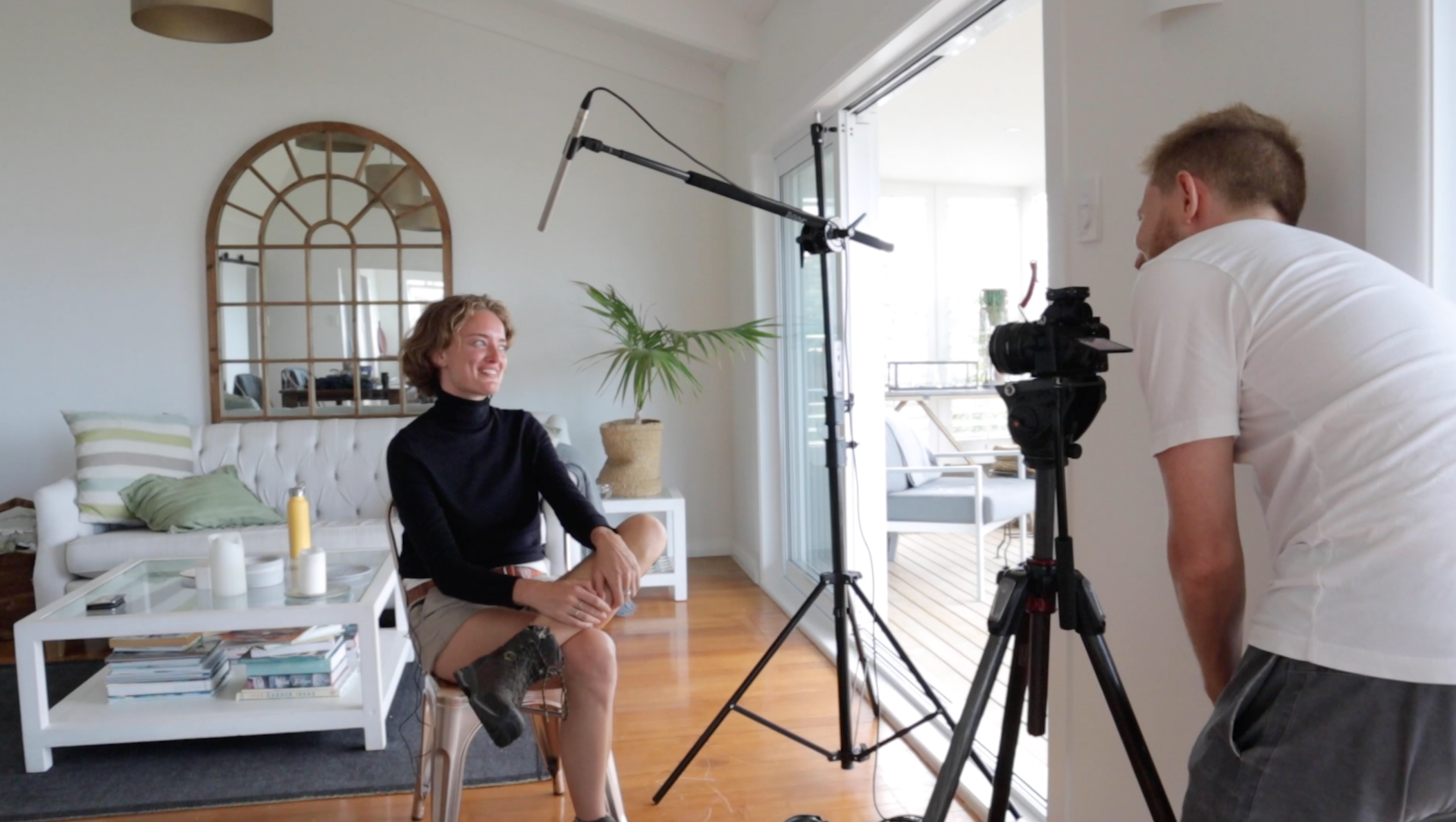 The key to being a good interviewer is to listen.

Maintain eye contact with your subject, and don't look down at your notes and questions.

Move the interview forward by responding to what your subject is talking about rather than waiting, poised to ask your next question.

Have a conversation with the interviewee.

Don't let opportunities to explore emotion slip away, and don't settle for generalizations. If your subject says, "That was the hardest thing I’ve ever done in my life," you need to follow up with something like, "Tell me why," or "Please talk about that a bit more."

Then once the interview is finished, make sure you end on a positive note so they feel good and will remember the interview as a positive experience so if you need to interview them again they’ll be up for it.

Also, respect their time and if they say they’ve only got half an hour to be interviewed, or however long they’ve said then make sure you stick to that. 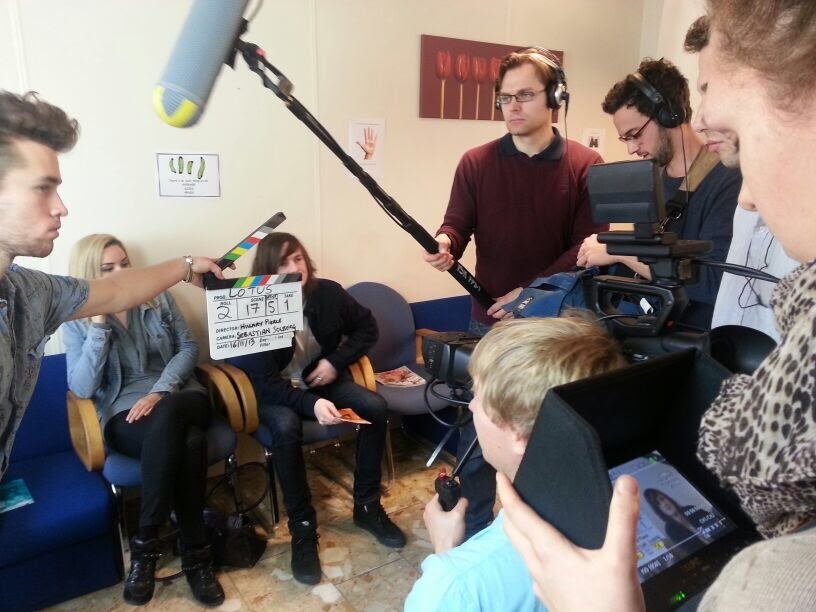 It’s important to remember that every interview subject will be different and each subject will have their own worries and concerns.

But the key is to adapt your interview style and techniques depending on your subject. If your subject is really nervous, you’ll need to give them more time to get into the flow of the interview.

Whereas someone who is really confident on camera will be happy to launch straight into the meat of the interview.

But this is what makes interviews so interesting and often my favourite interviews are the ones I least expected. So be patient, enjoy the process and remember to respect and be open to ideas and needs of each subject.

Want to make your dream documentary? 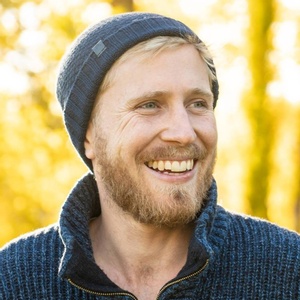